Hard Drive Not Detected – Know How to Recover Data

When I Questioned How to Recover Data on Facing the Issue – Hard Drive Not Detected?

External data storage drives, whether they are the USB flash drives or may be the external ones, I used to think that it must be very easy to use these external drives for data storage purposes.

But one of my friends acquainted me with some of the probable cases while dealing with them like he said it is quite possible then when you connect the drive to an MS Windows PC or some other device using the USB port, you might see that it is not recognized! Such problems can intervene due to several causes; either there can be some partition issues on the external data storage drive or it is even possible that you might be using a wrong file system or using dead USB port; or even driver issues can crop up in MS Windows OS; these being some of the common problems. In some of the worst case scenarios, you might be working with a drive that is completely dead in itself. 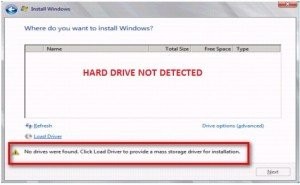 Now, this was quite a wake-up call for me for that particular time, but after a few months, when nothing of this was encountered by me, I got laid back and kind of forgot his instructions, only to find myself in a problematic scene right after!

“I had the Seagate backup of one terabyte along with an external hard disk. Only recently, when I plugged that into my office laptop (USB 3.0), I faced the issue that – hard drive not detected! It was showing up in my system.” I immediately posted my query in a couple of online forums from where someone suggested me to disk management and I found that it was not in the disk management either. Now after another set of instructions received henceforth, I opened device manager and there under the storage controllers, “USB Attached SCSI (UAS) Mass Storage Device” came up; and then I connected the hard disk drive, and apart from it, the hard disk drive was also not detected and to my aghast, the led on this hard disk was also not coming on.

Someone posted to check if the Windows is detecting the hard drive when I plugged it in. then it was suggested to be to plug my removable hard drive into the computer. If it is an external one, then I could flip the power switch on my hard drive for activating it. Some of the heavy-duty hard drives, the removable ones, sometimes even need to be plugged in with some different power cable before they actually start working. Next, I opened the Disk Management tool; for which, I had to press the Windows Key + R, and type diskmgmt.msc in the Run dialog, and finally press Enter.

I read some other posts and found them somewhat helpful. If Windows does not see the hard drive at all, then it is quite possible that there can be some hardware issue with your the computer’s USB port or may be a driver problem with the computer, or may be the drive is just simply dead. I was also being suggested to unplug my drive from the USB port and try to plug it elsewhere into some other USB port on the computer. And I had to see if that works in one USB port but does not work in another, then that must be a dead USB port. Now, if I plugged the drive into the entire USB hub, then I must try to connect it to some other system altogether, as some USB hubs do not give enough power for the external drive to make it function.

I did the same and then, a strange thing that happened; when I connected the hard drive to other laptops and computer systems, it worked absolutely fine. I am having one more of the similar hard drive that works well on other of my machines. I was completely clueless about the issue.

The forum posts were proving really helpful; then someone suggested me to seek help from this commercial service – SysTools Data Recovery Service. I immediately browsed through their web pages that detailed about the service and after a couple of hours of research on the available service; I was more or less convinced with what they were providing. Contacting the headquarters turned out to be a benefit proposition and quite an affable affair for me! The team really went out of their way to help me.